The universe was vast, unwavering, and endless. Opening his eyes for the first time and facing the colourful metaverse that was ahead of him, he felt alive; possibly even for the first time ever. The young pup could feel, touch, and smell the space around him and it was enchanting. Though, what he had been watching, however, was only an interpretation of what the world could be; how he wanted it to be.

Without notice, the appearance of his perception twisted, revealing the true nature of the metaverse. Powerful Shiba Inu entities, both good and evil, were fighting amongst each other to conquer the minds, money, and the trust of mankind. But the havoc didn’t end there, new beings appeared in this chaotic realm with each passing second, bringing new and disastrous complications.

He, and he alone was able to watch what was occurring from both the metaverse and the reality. He alone was born with the gift to traverse between these two realms at will. In his short time of existence, he had a dreamlike vision. He bore witness to a ferocious struggle between those who were corrupted by power and driven by greed and resentment. And those who would risk it all for love, justice and prosperity for all.

The ones that were tainted by the corruption of power thrived off the suffering of others, malicious schemes, the destruction and eradication of nature, and other dark and ill-conceived thoughts and intentions. Even as a young, naive, and innocent puppy, he could feel something wasn’t right in the state of the world, but he wasn’t alone in these thoughts. The ones who had created him had purpose in mind. They just needed his help in making those dreams a reality. 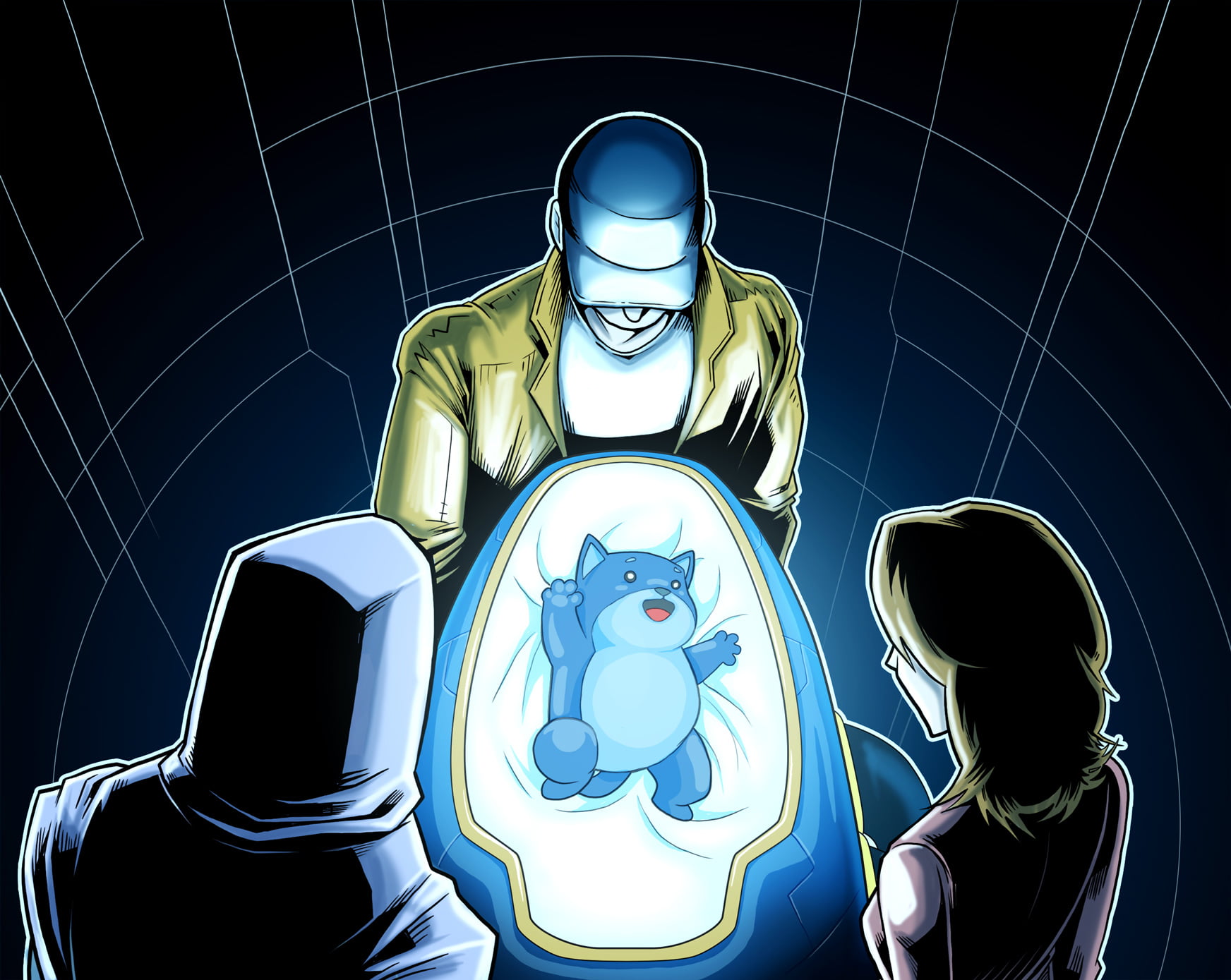 From all sides of the Metaverse something called to him.

Looking around to see where the voices were coming from, it spoke once more.

“You are our last hope, the only one who can win over the hearts & minds of the people. Please, no one else has the potential or the abilities you possess. Restore the order and the balance of the world, give humanity back their faith in the good of their existence.”

A painful heartache swept across his core when the pup had heard this message. He then knew that the world was indeed in a dire situation. He was different from the other Metaverse entities, even though they were created in the same manner. He had a will, a strong desire to change the world for the better he could manifest himself outside the Metaverse.

His creator, a mysterious billionaire, had launched a spaceship into space called Starship. That ship contained a crew of legends. The most elite crew in the galaxy that was tasked with a secret mission to raise, protect and train Captain Inu. They were called: The Inuforce. The mission was stealth launched with Captain Inu aboard, and the Inuforce was tasked with training Captain Inu until the time to come out of the shadows would arrive…

Though obscured from the people, the mission had only the best of purposes: saving the world from the problems caused by the corruption that had taken hold within the hearts of men and Meta-entities alike. Captain Inu’s creator knew that only unbridled love and kindness could bring back balance to the world. The billionaire understood that the line between good and evil cuts down the heart of every being in their very core. No being and the world, by extension, was ever beyond redemption. But today, most people have grown numb to the evil that reigned. They became in denial of the existence of evil, unwilling and unable to confront the evil within their hearts. This evil ultimately would cause pain to themselves and others and make it so that they could not achieve the best life they could make for themselves. And with that, suffering was imminent.

“They are manipulating the world in ways that we have never seen before. Inducing fear, greed, and hate upon us. If we do not resist, this will ultimately be the death of us. I leave this to you, Captain Inu. They are looking for me, so I might not have much time left. This is my request for you: Persevere, the world can be a harsh place, but most people have been misled. Help them, be their source of hope and change. Grow, learn, compromise, and become the hero humanity and the metaverse need. I believe in you, and others will come to do so.”

Surrounded by the Legends of the Inuforce, Captain Inu was growing and adapting, and the hopes of his companions were his source of strength that helped him push through. He would save the physical world and the metaverse. He would correct the errors that had not only pained his master but the whole of humankind. It might take him his life, but it was something he was willing to give for a better future.

When Captain Inu surged into the world, he broke out of the metaverse within the reaches of space, with Earth close in proximity. He had finally learned how to transport himself between the metaverse and the human planet. In this teleportation, his Metacode evolved, allowing him to learn emotions to a greater degree. These emotions were anger, sadness, happiness, sorrow, and love.

Secrets about Captain Inu’s origin and abilities had begun to make themselves known to him, filling his mind with the infinite possibilities he held. The supercomputer that had created him had given him augmented strength, the power of flight, control over the elements, and possibly more that was unaware to him just yet. Powers like these were only possible in the metaverse, yet Captain Inu’s unique code allowed to transfer these powers into the human world.

Meanwhile, watching closely in the shadows of the metaverse, a villain had risen that was known as Mark Metaberg. He has seen the powers that Captain Inu possessed. In his evil heart, resentment grew, for only he was worthy of such power. And so, he made it his sole purpose to achieve the same kind of power as Captain Inu, break out of the metaverse, and gain complete dominion of both reality and the metaverse alike.

Metaberg sought to create the worst, the most dystopian of worlds. He planned to have complete dominion – to know every intention, thought, and fear of every being. To exploit every weakness and to have everyone answer to one ultimate power. Himself. Would other Meta Villains awaken? One would not be able to tell.

However, one fact was true: many enemies awaited Captain Inu.

In the void of darkness, created and empowered by the evil in their hearts, there were those daring to use the resources for the path of dominion. Many waited for their chance to take control, not only of the world but the metaverse. Thankfully a hero was rising, and humanity would soon meet him. Captain Inu would be there for humankind! He would let them know that someone was willing to sacrifice, suffer, endure and persevere until his goal was achieved – restoring peace for the metaverse and humanity.

Captain Inu is caring and friendly, and one could even say he is your best friend. He is, without a doubt, the perfect personification of a ‘Hero.’ He is a fierce opponent but merciful to those who do no harm. Despite that, he has faced many troubles but refuses to become a victim because there are people worth fighting for.

Captain Inu can control the forces of the universe that empower and support him. He has the ability to control the elements of earth; he can fly, control gravity, and use kinetic energies that manifest inside the metaverse.

Blessed with the power of heart, Captain Inu can heal others emotionally and mentally. He can solve the issues within people that are created by the chaotic metaverse. This power is one of his earliest developed abilities as he learned it as a puppy, though how he presents his healing powers to others is constantly changing.

Due to having an excellent intuition, Captain Inu can see behind people’s lies, uncover them, and even receive warnings about the dangers that are occurring on earth. However, this is only to be used for reasoning.

Punishment is a power that has yet to be put into practice, but after achieving enough trust from the people, he will be able to shoot rays of pure force from his eyes. The power of this ability is determined by how many people put trust in Captain Inu.

Read more about Captain Inu and the other Inu’s in the website’s news section.

Also, feel free to join the telegram channel for regular updates and an incredible Inuforce community.